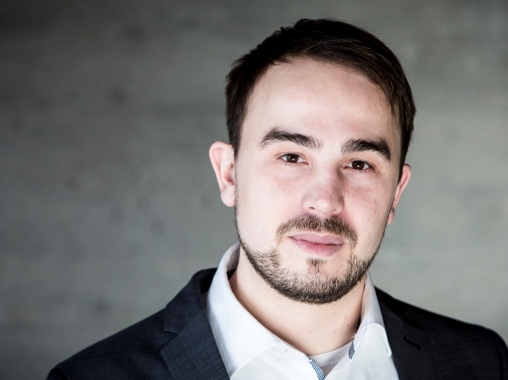 Semiodesk is a gold sponsor of SEMANTiCS 2018. The company is based in Augsburg (GER) and was founded in 2015 by Sebastian Faubel and Moritz Eberl. WSCAD and The University of the Arts London are just two organizations on the long list of Semiodesk’s satisified customers. We had a brief talk with co-founder Sebastian who shared some very interesting insights about the field Semiodesk works in, current projects and future perspectives.

Sebastian, the ontology editor modom.io is one of your current projects. Please be so kind and explain the purpose and function of an ontology editor?

The term ‘ontology‘ is a term used in philosophy and refers to the discipline of describing classes. We naturally do that every day: we recognize things, put them in categories of similar things and figure out common properties and relations. For example: if you see a thing with four wheels on the street you intuitively know that it falls into the category ‘car‘ and that all cars have the ability to accelerate. So better be prepared to get out of the way when it does! :)

To answer your question: the purpose of an ontology editor software is class description. One can define categories of things (classes), specify properties that all these things have in common and share this knowledge with others.

When we talk of ontologies, we refer to files that contain class descriptions in the standardized W3C RDF formats. These are becoming increasingly popular with the tech giants such as Google, Microsoft, Yahoo, Yandex and Amazon.

What specifically does modom.io do? What is the advantage modom.io has to offer?

modom.io is a web-based ontology editor which specializes on generating source code and documentation for data models used in software projects.

The primary advantage of modom.io over conventional data modelling tools is that it integrates corporate domain knowledge with publicly available ontologies and datasets. This significantly reduces the time needed for creating and documenting software data models because you do not have to start from a blank canvas for every new project.

Let me illustrate this with an example: we can start creating an application in the building automation domain with the data model provided by the IFC4 ontology. This is an extensive and fully documented building information model that we can tailor to our requirements. As a developer I’m not a domain expert - but using the ontology as a platform I can immediately start talking to subject matter experts and customers.

modom.io can also lookup the terms used in the IFC4 ontology online and provide additional images and links to Wikipedia pages. It turns the data model that used to be encoded in application source code into a knowledge base that can be used by employees to learn about the corporate domain. This reduces settling-in times for new personnel and risks associated with brain drain from people leaving the company.

Finally, modom.io ontologies can be exchanged with semantic middlewares such as PoolParty that provide semantic document search and machine learning. This allows to achieve a high level of knowledge consolidation and gives companies the ability to move ahead of their competition.

Is modom.io already available? What is the current status of the project?

We are developing modom.io in close cooperation with one of our customers. It is currently in a closed alpha state and we are planning to publicly release it in the context of the SEMANTiCS conference in Vienna. If you’re interested, come to my presentation in the Linked Data Management & Data Quality track on Thursday or visit us at our booth at the conference venue.

One of your further projects involves a partnership with Schneider Electric, a large publicly traded energy company. What can you tell us about your this collaboration?

The Ontology Library GenerAtor (OLGA) is a Schneider Electric project. It is a source code generation platform aiming to accelerate the adoption of Standard W3C Semantic technology among developers. It features a complete build tool chain to generate ready-to-use software libraries in various programming languages from an RDF ontology.

We have cooperated with Schneider Electric to improve Trinity our RDF graph database library for .NET. For this project we have added LINQ support to Trinity. This feature allows developers to query the graph database without using database specific technology. This significantly reduces the learning curve for a developer and improves overall sustainability and portability of the application source code.

It was a great pleasure working with them and we are looking forward to using OLGA as a source code generation platform for modom.io.

Is it true that your collaboration with Schneider Electric was initiated at SEMANTiCS 2017 in Amsterdam. Can you elaborate on this story -  just for our SEMANTiCS records please?

Yes, indeed! Charbel el Kaed from Schneider Electric presented OLGA at last year’s SEMANTiCS and we were immediately excited about the concept. We had intense discussions with him, Dries Verbrugge from KNX and Auriol Degbelo from the University of Münster about the prospects and the challenges of the project.

I think that this is a great example of the SEMANTiCS conference bringing together leaders from industry and research in the field of Semantic Technologies and AI.

Are you curious about Semiodesk and their solutions? Check out their website at www.semiodesk.com

About SEMANTiCS The annual SEMANTiCS conference is the meeting place for professionals who make semantic computing work, and understand its benefits and know its limitations. Every year, SEMANTiCS attracts information managers, IT-architects, software engineers, and researchers, from organisations ranging from NPOs, universities, public administrations to the largest companies in the world. http://www.semantics.cc